What We Can Learn From Space Exploration & Apply To Everyday Learning 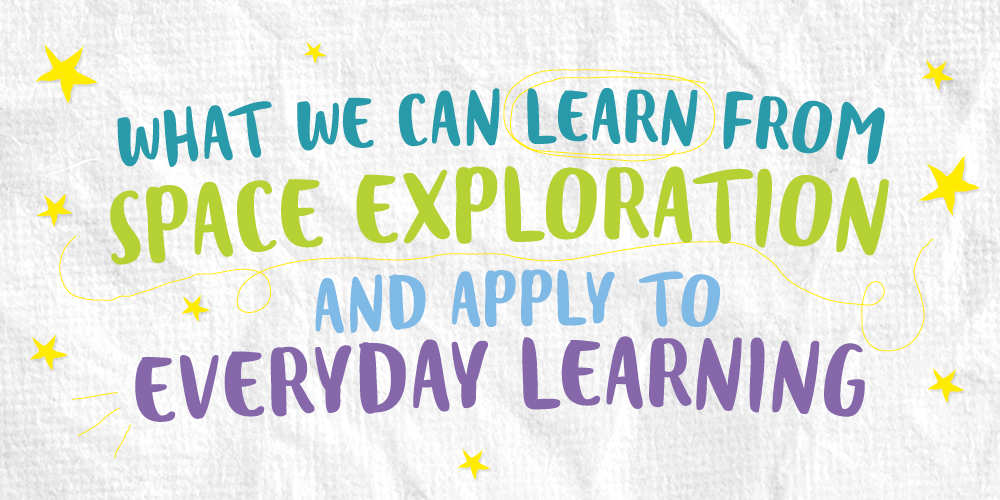 Do you remember learning about space in school? I do. It was a marvellous subject, brought to life by my fantastic primary school teacher. In art class, I made papier-mâché planets. In science, I learnt about gravity and what keeps the planets aligned. In history, I researched the men and women who challenged the impossible and helped mankind step on the moon for the first time 50 years ago. With the 50th Anniversary of the first man on the moon just around the corner on 20th July 2019, there is no better time to learn about what exists beyond the Earth’s atmosphere.

However, the reason why space is such a brilliant topic is not simply because young children get to learn about “cool stuff”. It’s a brilliant topic because it teaches children so much more about life and the world around and beyond them. For example, have you ever been told to “Shoot for the moon - even if you miss, you'll land among the stars”? This simple phrase that many pop stars have even quoted in their lyrics (like S Club 7 and Kanye West) suggests that space exploration encourages children to try and try again: a lesson in resilience.

So, when you’re next exploring “infinity and beyond” in your classroom, try and relate what your children learn about space to something that could influence their personal lives. To help, here are three concepts that I have interpreted from space exploration and applied to my everyday living and learning.

Three Things We Can Learn From Space Exploration And Apply To Everyday Living And Learning
1. Exploration and the need to discover is innate.

From the beginning of mankind up until today, humans have always been curious about the world around them. People from the Stone, Bronze and Iron Ages travelled miles by foot to discover new land; Christopher Columbus sailed high seas to discover new territories; and Neil Armstrong rocketed into the sky to step foot on the moon.
NASA states that “Curiosity and exploration are vital to the human spirit.” Encourage children to be more curious about Earth and space in an exciting ICT class during which they can explore the NASA Kids Club website page. Whilst collecting facts from the site, ask children to think of further questions they have about space as well as the world around them. Encourage them to be curious by prompting questions such as: Why is the sky blue? How hot is a star? Why do oranges grow in Florida, not in England? How long would it take to walk to Australia?

"Curiosity and exploration are vital to the human spirit."
NASA

2. Understanding the size of Earth in the universe allows us to understand how small we truly are.

When children experience unfortunate situations, their emotions can quickly change from happy to sad. Something as simple as kicking a football over a fence can alter a child’s mood for the rest of their day completely. Teaching children about space and how big the universe is, can allow them to reflect on their difficult situation with a new perspective. To put this concept in simpler terms, here’s a quote the I particularly liked to describe Earth in the greater context of the universe.

If a child is struggling with a small problem, it can be comforting for them to recognise recognise the size of their issue against the size of the universe. Here’s a practical explanation of how you could illustrate this concept to your class or a single child.

Set out a variety of objects ranging in size and ask a child to select the size of the object that they feel represents the size of their problem. Then explain to the child that Jupiter, the biggest planet, is 11.2 times bigger than Earth. Furthermore, the sun is 109 times bigger than Earth. As you stretch the examples further and further, the child’s problem suddenly seems smaller and smaller. Although this will not necessarily solve the matter at hand, a new perspective can often bring comfort to anyone struggling with an issue.

The next time you encounter an issue, try and change your perspective on the matter and see what comfort it brings you. After all, sometimes all you need to resolve a problem is just a little space.


3. Seeing is not necessarily believing.
It’s 2019 and the Earth is home to 7 billion people. I remember, when I was younger, reading that the Earth was home to 6 billion people. This leaves me wondering: if the population of our planet has increased so significantly in just two decades, how can it be that there aren’t any other life forms growing at a similar rate elsewhere in the universe? Metrodorus of Chios, a Greek philosopher, said,
"It is unnatural in a large field to have only one shaft of wheat, and in the infinite Universe, only one living world."
Metrodorus of Chios

The great debate of whether extra-terrestrial life exists or not is a brilliant topic for the classroom, and one that children should also consider in everyday life. Young children are often told to believe in something without question. For example, in science class, children are taught that plants absorb sunlight which helps them to grow. However, children never actually witness the planet absorbing the sunlight as it is a process naked to the human eye. But they still believe it.
There is evidence to support both sides of the ‘alien debate’ so split your class in half and encourage each half to explore and present one of the two arguments on whether aliens exist. This is a great introduction to argument construction as well as a task that allows children to again question and explore the boundaries of human knowledge.

As demonstrated above, space is a wonderful topic, bursting with learning possibilities that can be stretched across all areas of the curriculum. When teaching children about space, remember that it is a subject that allows children to travel to worlds outside the realms of their imaginations. It encourages them to explore the world, to ask challenging questions and it opens doors to brand-new possibilities. Never underestimate what a child can learn from space exploration.

I’ll leave you with one last quote from one of science’s brightest brains. It’s a quote that you can use in your classroom to remind children to be proud of who they are and to never dwell on what happened yesterday, for they may just miss out on something wonderful happening today.

"Remember to look up at the stars, and not down at your feet."

Written by Florence Robjohn - Creative Marketing Assistant, Out of the Ark Music Team.

OUT OF THIS WORLD RESOURCES

• Our fantastic class assembly musical, Neil Armstrong, follows Armstrong's race to the moon and shares the story by presenting a TV chat show, where your audience will learn why this spacecraft journey was such a giant leap for mankind. It also contains the perfect song, Great Explorers, to celebrate the excitement and fun of exploration. 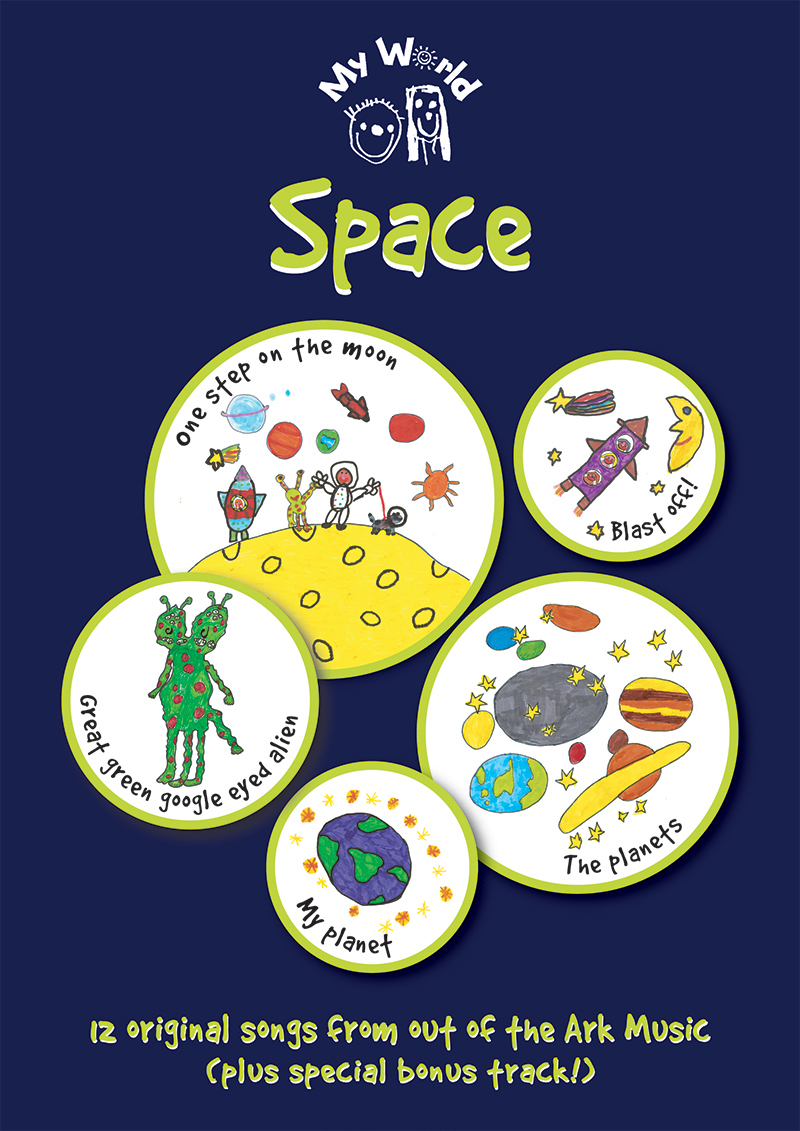 • Whilst you've got aliens on your mind, sing along to Great, Green, Google-Eyed Alien from My World: Space and prompt a creative writing task about what happens when an alien comes to your local town.

• Don't forget to try our explosive rocket craft available when purchasing the premium package of My World: Space.

• Out of the Ark Music recently teamed up with the Hallé Orchestra in their annual Come and Play Concert. Hallé Orchestra, along with 14,000 children, performed an extended version of Mary Green and Julie Stanley's One Step On The Moon in a series of 11 concerts across Manchester.

COMING UP!
Summer is coming so we’re taking a little blog break! Tune in after the lazy summer days for: top tips on harvest festival celebrations; one-to-one interviews with the writers of our NEW nativities; and loads more!